While some aspects of the housing/mortgage market have stabilized over the past few weeks, we're still waiting for some important guidance about the path ahead.

The last few newsletters are worth revisiting, but here’s a recap:

Until then, expect to see the following problems persist:

Higher Mortgage Rates (Relatively).
Yes, mortgage rates are still historically low, but based on the trading levels seen in US Treasuries and mortgage bonds, they’re much higher than they would normally be. 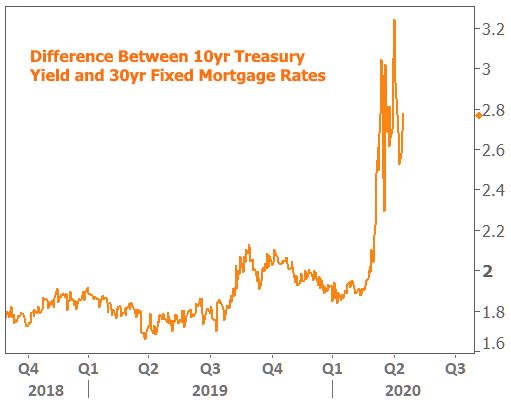 It’s one thing to see rates diverge from Treasuries.  That definitely happens.  The divergence between mortgage rates and mortgage bonds is even more telling.  Nothing like this has ever happened–not even remotely close. 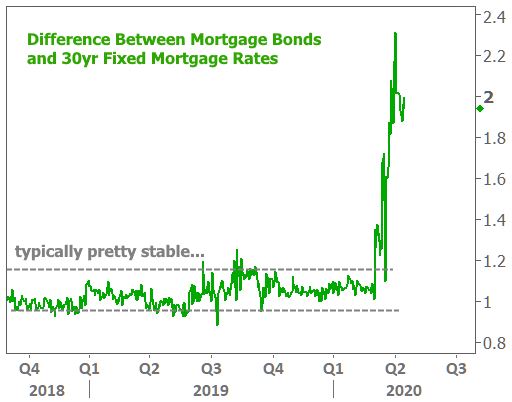 Higher Rate Volatility.
While volatility has died down significantly from 3 weeks ago, it’s still much higher than normal.  That means the rate you see in the morning could be very different in the afternoon.  The differences can be even bigger from one day to the next.  The true level of volatility isn’t well-captured by most of the traditional sources.  Granted, things have died down quite a bit, but the following chart gives you an idea of how under-reported the volatility can be. 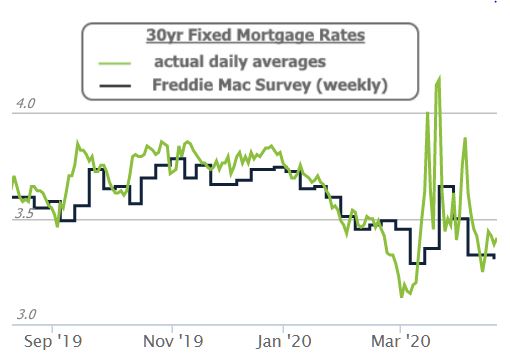 The Return of Points.
Upfront “discount points” charged on a mortgage were more prevalent in the past but rarely made economic sense in recent years.  Now they’re the only option for many scenarios.

In the past, loans with significant risk-based cost adjustments (for things like low FICO, high loan-to-value, investment properties, cash-out, etc) would be quoted a higher rate because investors were willing to pay proportionately more for any given increase in the note rate.  The higher price paid by investors would soak up those risk-based adjustments and the borrower wouldn’t have to bring any extra money to the table.

But that’s no longer the case.  Investors aren’t paying up for higher rates like they used to  No amount of extra interest is worth the extra upfront expense in their view. But the risk adjustments still have to be paid.  So it falls to the borrower as an upfront cost.  In other words, expect to see quotes with discount points for loans with several additional risk factors.

Speculation and Misinformation.
Tensions are running high everywhere.  The mortgage industry is no exception.  Not everyone is taking the time to vet sources or ask an expert before sharing info.  For instance, one individual mortgage lender made some significant changes to its credit requirements last week.  By Monday morning there were news stories and social media posts claiming (erroneously) the changes were industry-wide.

Yes, like many economic reports, this one may get worse before it gets better, but that brings up an important point about “hope.”  Rather than agonize over a progressively worse recession that happens for reasons that are only well understood in hindsight, we all know why this is happening and no one would be surprised to see the economic data get even weaker before it gets better.  That’s why the stock market barely budges when staggeringly bad numbers are released these days.  The drama is well understood.

The upside is that we’ve never been in a position where the entire planet is simultaneously planning on things getting better based on simple, widely available, easily understood facts.  Whether it’s due to an eventual vaccine, better testing/control/quarantine measures, or successful strategies for gradually reopening the economy, the recovery equation is simple.  More people returning to work + less people getting sick = a rapidly improving economic picture. 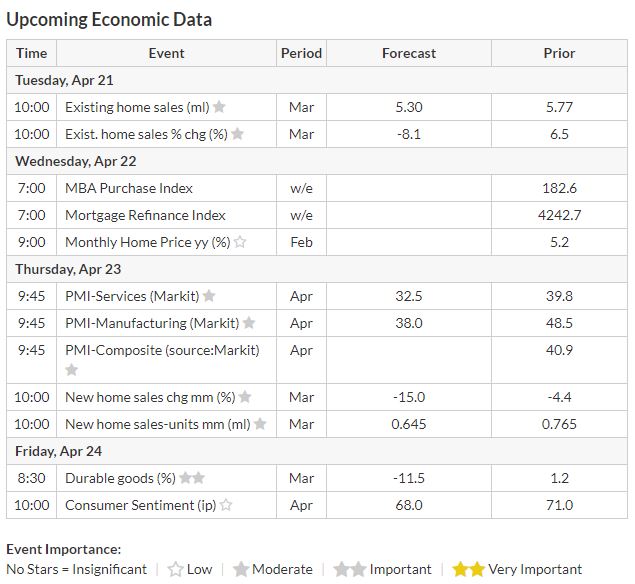